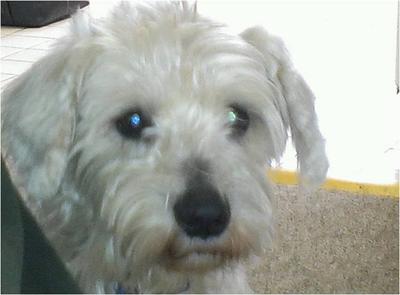 
Oliver showed up one day on a lady's farm in 84 Pennsylvania. He was a stray, covered in burrs, infested with fleas (to such an extent that the rear quarter of his back was black from his saliva where he had been licking it), and had a BB pellet in his side.

The kind lady took him in and gave him not one, but two baths in order to bring him back to a degree of cleanliness. When it was clear neither she, nor her family could keep him, she turned him over to Angels for Animals rescue in 84 Pennsylvania, in hopes they could find him a forever home.

A rescue for mini's in Pittsburgh,Pa.( from whom we had gotten our Toby ) sent us his picture. We went to "just see him" in 84 Pa. which is about an hour from where we live. We fell in love with him immediately and he with us, so Oliver came home with us that very day.

He needed surgery to remove a bladder stone, the size of a river pebble, and a grooming. Now he is "all spift up" and on the road to full recovery.

At first he was explained to us as a schnauzer mix, but the veterinarian, and the groomer who raises mini schnauzers, have both said Oliver is a pure white, full-blooded mini schnauzer, something I suspected almost from the beginning. He could be Casper's twin, except for the natural ears. Could it possibly be that my good boy Casper sent him our way? Regardless, we love him, and Oliver is now in his forever home.

This short note is our way of thanking all the people who helped rescue Oliver, before we met him.