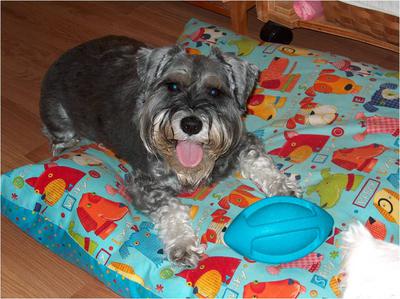 Ziggy is the master of sounds in our house. He senses when a snack bag is about to be opened. He hears a manual can opener being taken out of a drawer. When the cupboard door, which holds pet food, opens, he is on high alert.

Now, you might ask, is he over weight? No. Is he sluggish and lazy? Absolutely not. He has constant energy. He's not a hyper boy, he's just full of Joy. He's built like a Pot Roast, all muscle.

He has 2 favorite toys, an Orange football and a Blue football. They both squeak. We throw the ball, he runs, gets it, drops it at our feet, then grabs the ball biting pushing it, holds it in his mouth and violently shakes his head, all the while keening. He looks up at us and makes a sound like "Please throw it again? He is a ratter, after all.

Zig has excellent hearing and is a very good watch dog. He lets us know when there is a varmint that does not belong near our house. He doesn't like baths and grooming but he will tolerate it. He has a step-sister who try's to keep him in check. Phoebe is 3 years older than Ziggy and is very protective of him.

Going to the breeder, I brought Phoebe with me. Asked permission to bring her in so she could make the selection. There were 4 pups, 2 male, 2 female. Phoebe looked around, went to Ziggy, introduced herself, licked his face and we brought him home. Nov. 5th he will be 5 years old and he is the best, along with his sis.

Until 8 years ago, I never thought of Schnauzers. Now, I can't think of being without them. They are our Joy.