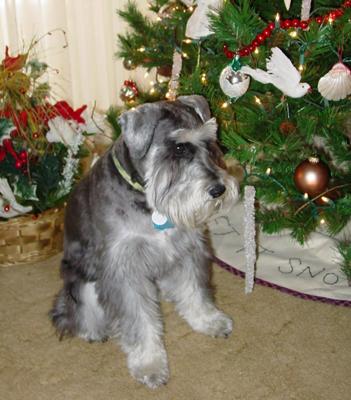 Ebenezer came to our home in July, 2008. He was just 8 and a half weeks old when we got him. He was a clean and healthy little guy. We quickly got him to the Vets and had his shots started, and got a clean bill of health. The Vet told us all about Mini-Schnauzers and we have been following her guidelines ever since. He now is a 22 months old, healthy, black and silver mini-schnauzer.

Ebenezer was originally given to a family with two boys and a single mom by a local breeder. She thought the boys needed a companion. After a week, they decided that he was too much work, and they really couldn't afford him. He had been kept in a crate for 16-18 hours a day. The mother often worked double shifts and swing shifts (in the health field).

She asked a neighbor to ask if anyone wanted a new puppy. So, the neighbor told her sister to ask around to see if anyone knew of a family that would want a mini-schnauzer. She and her husband contacted me. I thought about it for a day, (could hardly contain myself until I got home) and asked my husband that evening, and the rest is history.

We made an appointment to see Ebenezer, and ended up taking him home with us. The boys had to meet with us to see if we were going to be good pet parents, and to see if the puppy liked us.
We send pictures of "Eb" quite often throughout the year to the boys, especially at Christmas and Birthday time. And, are planning Ebenezer's second birthday on May 22.

Ebenezer likes watching the Western channel (horses) and loves Football season on TV. He gets to go to the dog park and play with the "big dogs". He gets homemade doggy treats. He also has his favorite toys (the squeeky ones) and his favorite blanket! He drags it around the house like Linus in the "Peanuts" cartoon!

And, most of all, Ebenezer makes us laugh everyday and we love him.