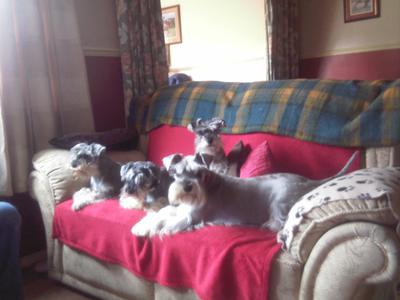 here's the pack lounging on the sofa 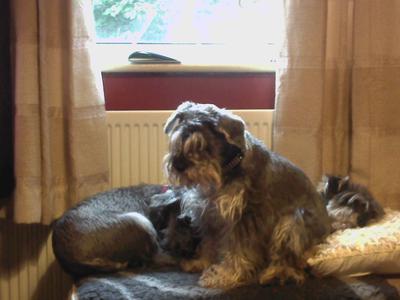 that's billy in the middle

On arriving at a so called rescue centre which has now been closed down to pick up an eight wk old puppy, i passed a cage with two ex breeding bitches who were very timid and one had only 20% sight in one eye and none in the other. i had already decided that they where coming home with me as i carried on walking to the end i saw a pitiful sight an ex stud dog completely blind with no skin on his nose or ears he was so thin every bone in his spine showed. i decided i was going to take him home to die in comfort i had to pay the sum of 650 pounds to rescue them as i arrived home to greet my other miniature schnauzer left at home i began to think that will my husband would say but when he saw them his heart melted.

they all had worms coming from both ends, one almost died within 3 days. all needed extensive dental treatment. Bill was still with me 3 years later. i lost him last year. then i lost Betty 8 weeks ago. the day she died my other dog whom i had for 9 years was diagnosed with cancer and i lost her last week. but i would not have changed a thing although the road has been hard.

i still have Harriet who now is totally blind the puppy i originally went to pick up is now 4 years old. called him Dexter

ps. we pick up our new puppy next wk sooooo happy