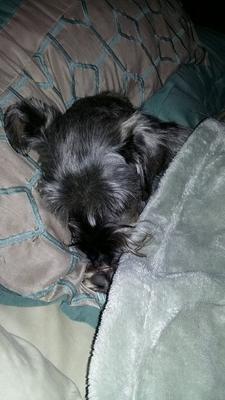 A nap after coming home from the Shelter!

"Rocky", a dark-grey Miniature Schnauzer was found running the streets. He was wet, hungry and unrecognizable as a Schnauzer due to thick filthy matted fur. Found by animal control, he was groomed by a local groomer who provides services to our local Humane Society. His before-and-after pix were posted and pinned to my wife's Facebook page (we know the groomer). She showed them to me, a BIG mistake! I secretly went and visited with Rocky at the Shelter. Two weeks later (the day before XMAS Eve), I adopted Rocky and brought him home in my police patrol vehicle (I'm a policeman of many years). Despite riding in the "Cage", he was thrilled to go home with someone. He joined our other Miniature Schnauzers - Sarah, Macey-Belle (adopted) and Fritz (adopted). Now there are four. If you come for a visit, DO NOT expect it to be quiet! Well, it's nearly a year after Rocky joined the family. All's Well.