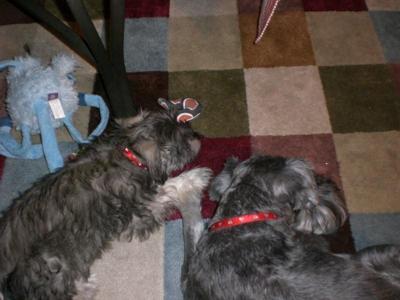 We got Riley, our younger dog to be a companion for Jeht, our older dog. We had recently lost his long-time friend, Mindy, and he missed having a furry friend to hang out and play with. In this picture, Riley was about 4 months old and Jeht was 6 years young. They were taking a nap after a round of tag. Jeth had plopped down first, and Riley laid next to him, placing his paw on top of Jeht's. Needless to say, these two became fast friends. Now Riley is 2 and Jeht is almost 8. They are inseparable, even though Riley gives Jeht all the grief that a younger 'brother' is known to give. It's so much fun to watch them play and rough-house with each other. Riley keeps Jeht, and the rest of our family, young at heart.