by Kat
(On the Road) 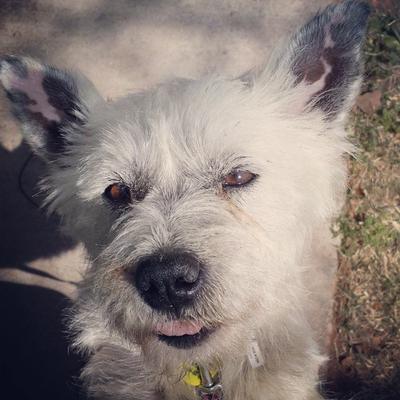 While running some errands one Saturday I added PetSmart to the list, at least to go and look at the dogs in person and see how I felt about a new dog (since I've barely been around dogs aside from my pitbull who passed away after 13 years at my side).

We walked in the store towards the cages and kennels, and in the very first pen was Sherlock (then Lilly), with a dachshund/chihuahua mix and a "chug". She was scraggly, calm, not barking or doing much of anything. When I went to pet her her ears went down and her face formed a sweet, submissive smile and it was love. I didn't need to walk any further.

The foster parent's daughter was there to tell me a little more about her and how she got on with cats, was potty trained and quiet. She's supposedly about 2 years old and was dumped at a clinic so no one knew much about her except that she has had puppies in the last 6-8 months. Her breed was called "Cairn Terrier" on a note on the cage and "Wheaton Terrier" on her paperwork but as she was soaked in urine and a mangled mess of fur, we took her to a groomer who then guessed Chinese Crested (due to spotty skin and thin hair on her head) and West Highland Terrier (although she has a short tail).

A month later, we were tired of guessing what she was and got a DNA test. She's almost all schnauzer, pure schnauzer on her mother's side and a half schnauzer father, grandparent and great grandparent on the males side, (so like 1/16th mixed with Finnish lapphund). She appears to be false white parti colored, due to her darker undercoat, white to off-white coat and myriad of polka dots.

She doesn't bark, she doesn't run off, in fact she follows me everywhere, she doesn't know any commands at all but she's learning fast. She sleeps while we're working and will walk for miles when she goes for hikes with us. We named her Sherlock after a couple days of suggestions and debate.

We travel full time in a 5th wheel so I was worried no one would adopt to us but it was surprisingly easy. She's the perfect size and happily sits outside with us and the cats on warmer days. She's exactly what we wanted and I saw it in her face the second I met her!