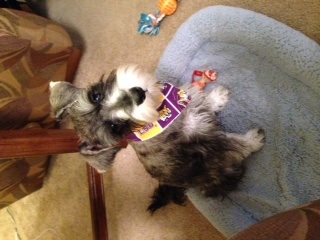 Otto is a 4 month old male miniature schnauzer. I found him in the newspaper. When I went to see the 8 puppies advertised, I was immediately drawn to him, and noticed he was weezing. Turns out he had pneumonia at 7 weeks old. If I hadn't brought him home, he probably would have died.

These days you would never know he was ever sick. He's a very energetic and loving puppy. He loves walks, being outside, his squeaky pig, his girlfriend (a stuffed schnauzer), and spending time with his Grandma, uncles, and cousin poodle. He has no pet peeves and is very happy-go-lucky.

In these photos, Otto was watching 2 different LSU football game, which we do every Saturday with the whole family. He'll sit on his bed and watch the game. They were both interesting games. When I asked Otto what he thought about the games, his only response was 1. To lay down, and 2. To tilt his head. I guess he was as unimpressed by LSU's performance as the rest if us.