Miniature Schnauzers Jake and Fritz To love a rescue 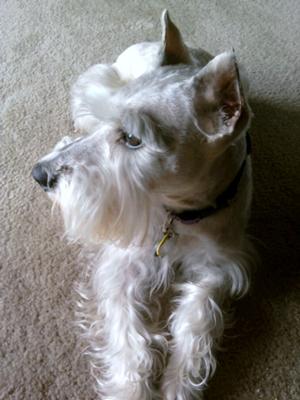 Fifteen years ago Bart, my father-in-law's miniature schnauzer whom we brought home after he passed away, had to be put to sleep due to cancer. Even though Bart was the 1st miniature schnauzer I'd ever been around and I'd only had him for 18 months I was heartbroken when he died. I knew I had to have another one. I learned about rescue groups through my vets office.

I contacted a miniature schnauzer club in my area who did some rescue and Jake came into my life. He was about 2, or so they thought, and had been found wandering the streets. Little did I know that I too would have problems keeping him in the yard! I swear he would go around the fence and push on each picket to find one that was loose! Jake filled my life with joy, love and companionship for 15 years. The last couple of years of his life he was completely deaf so that made for some comical situations! Lots of hand gesturing on my part, or turning the stair light off/on to let him know I was home. He would bark for me to come "find him" when he didn't know where I went! On Feb 3, 2010 at age 17 I helped Jake cross the Rainbow Bridge. It was a very difficult decision to make but one I am glad is available if we need it. I was devastated and cried daily for weeks.

Of course there was no question I would get another miniature schnauzer! I contacted the same group I got Jake from but they had no dogs at that time. I went to a "meet and greet" at a local pet supply store where another rescue group had miniature schnauzers available for adoption...now I have Fritz! Fritz looks different from Jake as he has cropped ears and is silver in color; Jake had natural ears and was salt & pepper. Getting used to an active dog who can hear has been an experience! Fritz was an owner surrender...the owner had a terminal condition. Fritz is a sweet 2 yr old who loves to cuddle! I hope to have many loving, joyful years with him as I did with Jake!