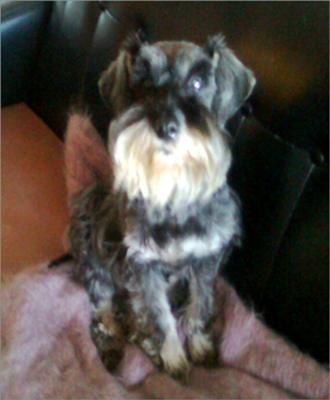 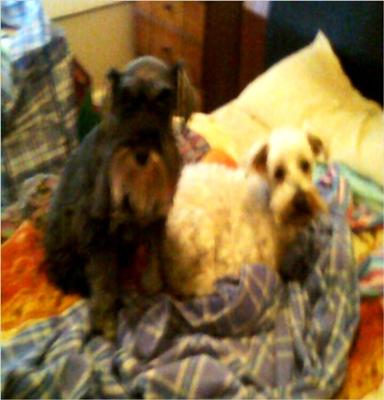 The Schnauzer Club of Victoria rescued 14 female and 3 male schnauzer's from a vile backyard breeder in Anakie some 7 years. The 3 males had to be put down but a home was found for all the 14 females. We were lucky enough to be chosen by Sybil to provide her with her forever home.

She was the sickest of all the girls and it was touch and go whether she would pull through the desexing mainly because she also had kidney stones which meant she could barely urinate and was in constant pain and was quite malnourished. The Toorak vet who looked after her and two other girls from the rescue said they had never smelt anything like the 3 of them when they were brought in. It took his groomer 5 long washes and rinses before she could even begin to try to clip the matted hair right off at the skin they were so putrid.

When they put them out the back for a wee, they all went on tiptoe - it appeared they had never felt grass beneath their feet - only the concrete floor of the pens they had been in.

Sybil stayed in foster care with a lovely couple in Armadale (who belonged to the rescue group) until she was well enough to come to us. When I went to pick her up I was greeted by their giant male schnauzer "Basil". Hence choosing Sybil as her name - she was the boss and it just reminded me of Fawlty Towers, Basil and Sybil.

Sybil came home with me terrified. I took her in and she met "Noddy" our little maltese x terrier who had been so depressed since his old mate "Tulip" had had to be put to sleep. They didn't have a lot to do with each other over the next week or so and we just let Sybil settle in and come to us in her own time, just ensuring kind words, gentle pats water and specially cooked food to aid in her recovery. She didn't, and still doesn't like men until she gets to know them - affirmation of her treatment prior to her rescue.

The Schnauzer Club had a "reunion" that Christmas and 12 of the 14 girls all turned up to wear party hats, very pretty neck adornments and all had a romping good time.

These years on, Sybil runs the household, still with Noddy by her side. She has had 3 bouts of pancreatitis and has had to have a few teeth taken out since, but she is so happy. As I write this she's lying at my feet looking so pretty (they were both clipped and styled last weekend!). I'm very glad I brought a schnauzer into the house. The only time I'm sorry is at night when she and Noddy and one of the cats take over our queen size bed and there is no room for us!