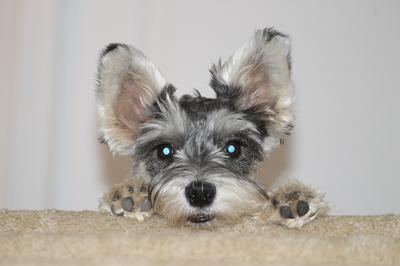 Radar staring me down from upstairs

Radar came to us in November 2013, at age 4 months. We adopted him from a Recycled Pets, a rescue group in Rock Hill, SC. He had been surrendered there because his first family was not able to deal with him properly.

Radar is a mess, a typical Schnauzer. Very opinionated and stubborn. We are continuing to train him on proper doggie skills. Thankfully he is very food motivated.

He loves to play with toys, and he loves going on walks. In April, we adopted another young dog, a German Shepherd-Beagle mix (we think). They get along great and even though Radar is much smaller than Sasha, he enjoys wrestling with her.