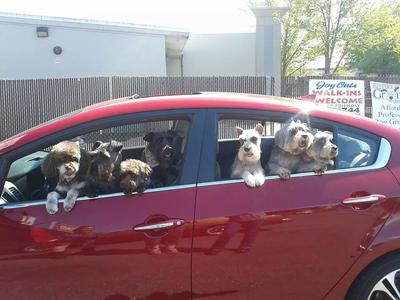 Here is Blitz, Fritz, Muddy, Stark, Smokey, Sally and Terry on expensive haircut day. All of these crazy dogs are rescues.

Blitz and Fritz the black Schnauzers came into my home after I had to euthanize one of my Schnauzers. They are double trouble. Fritz has a ridiculous looking under bite. Blitz is the smartest dog from all 7. He catches Frisbees and balls like nothing I have ever seen. He stores all of his frisbees behind the couch and there is quite the collection.

Muddy the brown and white Schnauzer is my most insecure dog. He loves to give high fives but then again it could be from him being the submissive dog. He is my favorite just don't let the others know.

Stark the brown Schnauzer had taken a long time to get to where he is. Like Muddy he spent the first year and half in a cage with no human interaction. The breeder had 69 puppies she couldn't get rid of and so he came to find his way to my home. His favorite sleeping position is on his back and he loves to groom all the other schnauzers except for grouchy Sally.

Smokey is probably the craziest dog in the world. His original owner had dementia and was put in a home and he has some behavioral issues that will not go away but he is so happy to be in a home with a bunch other dogs to keep him busy.

Sally and Terri are sisters that I rescued after the owner didn't want them anymore as they were only used for breeding. I have to say Sally is a bossy girl. It is her way or no way. She lays on the end of the bed and tries to get any of the dogs that disturb her.

Terri loves stuffed animals so much. She will chase down the dogs that take her "babies" and she will put them in the food bowl when she eats so no one take her animals.

I never feel like I have a lot of dogs until haircut day comes around like the picture I have submitted. It only takes about 20 minutes to get to their haircut appointments but by the time I get there I usually can't hear from all the barking.

Did I mention they are all under the Banfield plan. I spend more on their healthcare then anything else. Having 7 dogs has been a lot of fun and effort. I wouldn't trade anything in the world except for having my original 2 Schnauzers back in my life.

There are 5 boys that all going to turn 5 this year and the girls will be 11 this year.