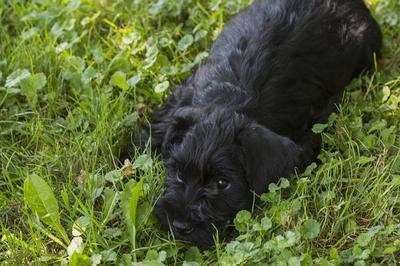 Copper was born on June 26, 2016. That just happened to be his owner's birthday too! With his mischievous eyes and dashing good looks, he was bound to become a part of the family sooner rather than later. Copper loves to run as fast as he can, and by the time he gets home from the dog park, you can see Zs floating off of his head! When his mom went to a brand store to buy toys, she got one and then decided to go to a cheaper store. She bought a little pig at the store, and hoped he'd like the more expensive one than the pig. Well, wouldn't you know. A week after she went to the store, she saw the brand store toy abandoned as he chewed happily on his pig. What a surprise. While his mom does work on her fancy screen folder, he loves to lie on her lap and get some shut-eye. On school days, he goes to school to pick up his mom. He loves anybody and everybody. Although he is the sweetest young man, he has a bit of a problem.
He thinks he's a Rottweiler.
It's true. Whenever he meets other dogs, he stands tall and barks. He seems not to know, or care that other dogs can range from double his size to 15 times his size. He really is just a big dog in a small body. He loves listening to music in the car with his mom. He prefers salsa music, but can listen to some pop music once in a while. He's very obedient, but he can be a little stubborn (what else can you expect from a mini) but he is the guard dog of the house. Like his mom always says, dynamite comes in small packages!

Join in and write your own page! It's easy to do. How? Simply click here to return to 2016 Schnauzer Photo Contest.