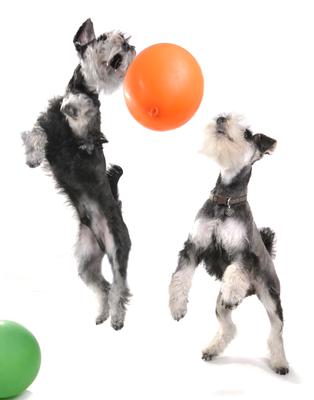 Hi, I'm Reggie and this is Edie, as in Edith. She is 6 months old and I am one year. Although she is bigger than me I can still out-agility her and definitely jump the highest! Every toy I pick up and play with, she has got to have it too. I have learned to just let her have it as it's easier. Some of my favourite toys I put up a bit of a fight with as they are my favourite, usually Mom makes her leave my toy and it gets replaced with one of her own. Although we are not related, this is what having an annoying little sister must be like. Our Mom likes photography and gets us to play in front of the camera. We got the balloons out the other day to play with, Edie was scared at first, but I showed her it was ok and she grew brave.

Hello, I'm Edie and this is a photo of me and my big bro Reggie. He is double my age but I am bigger than he is, which I don't think he likes as I am a little stronger at tug of rope - I sometimes let him win, as he can be a little sulky, I guess that's fair as I also try to get all his favourite toys off him. The other day our Mommy took some photos of us playing with balloons. We had fun jumping and running to try to catch them. We only did it for ten minutes because Reggie popped them all. He is great at jumping and one day I might be like him!