Chunk aka The Hunk of Chunk Of Burning Love 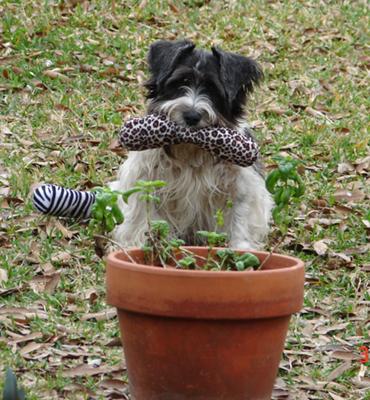 Can You Come Out and Play

With an upcoming 10th birthday, and the tragic loss of the 9yo BD present-(Sunshine, an adorable White Mini passed of Liver failure at 13 months), we were seeking a replace (if that is such a thing with a Schnauzer) white for our son's 10th BD.(2002) We discovered the Parti. Our son fell in love, stating he would name him Dogoat as he thought he looked like a dog and a goat. (only thru the eyes of a 10yo).

I fell in love with a toy White while looking at the Partis. A week later, we picked up Sinclaire and brought all 1.7 oz of her home. A week later, Chunk's litter was weaned. Upon receiving him, we noticed how much weight he had gained, I remarked, "Well, you are just one little Chunk of Love aren't you?". And the name stuck.

Chunk is the middle child between his bit little sister Sinclaire and his little big brother-Boudreaux-a Catahoula Curr. Typical middle, he is the quiet one, but knows everything happening within miles. Unfortunately, he is suffering from Cushing's and the meds are not working with even more horrific side effects. Loving squeeky toys, he will taunt the siblings with the noise to lure them out for a game of chase. This particular day, he could not find a playmate. In despair, he sat, holding the lone squeeky, wanting, waiting, and wishing for one of his pack to come play.