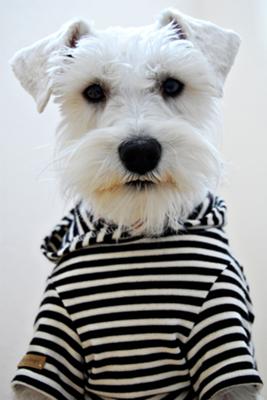 Yuki is our first schnauzer and the reason we have fallen in love with the breed. We got Yuki through a breeder and we had to drive out of state, to the breeders home, to pick up our little Yuki. We named her Yuki, because Yuki is Japanese for snow, and thought it perfectly describes the color of her fur. She was born in August 2010 and is bossy, feisty, and clever.

Prior to owning Yuki, I had other dogs, but never a schnauzer. I have read lots of literature about schnauzer intelligence, but it wasn't until one day I had my first true experience with schnauzer intelligence. I was sitting on the couch snacking on something. Yuki was of course begging for my food, and I was ignoring her. We have taught our two schnauzers to ring a bell on the backdoor to go outside to do their doggie business. After giving up on begging, she rang the bell to go outside. I set my snack down on the end table, walked to the backdoor, unlocked the door, and opened it. Only, Yuki was not there by the door. I turned around and there she was eating my food. She darted so quickly in the opposite direction, I didn't even see her sneak by me. I could not believe it, she used the bell as a distraction, so she could eat my food. I was actually outsmarted by my own dog! I couldn't help but laugh, but that was the last time she'd pull that one on me!