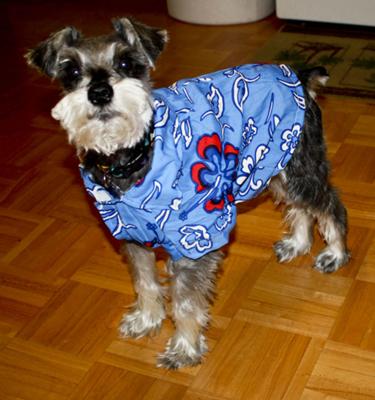 Our Miniature Schnauzer Wickkett has been with us 9 years now, My husband brought him home from work one day. A co worker had gotten him as a puppy and after about 2 days decided he couldn't handle a puppy and could not give him the time he needed.

Wickkett has such the little personality. He loves to model and when he sees the camera he starts posing for it, such a camera ham. He is scared of sneezes, you sneeze - he runs, hehe. He absolutely detests taking his PJs off in the winter and would wear the same pair 24/7 if we would let him. His favorite toy is a little pig that looks like a ragamuffin at this point.

After a very scary sickness this past fall where we though we were going to lose him we are happy to report he is doing well and I don't think the vet ever knew the true cause of him being sick. After much research he is now on a homemade organic diet which he likes more than dry old dog food anyway. He is truly the king of the house, little 13lb wick can still take up and entire couch as good as any big dog by stretching all 4 paws straight out while lying down.