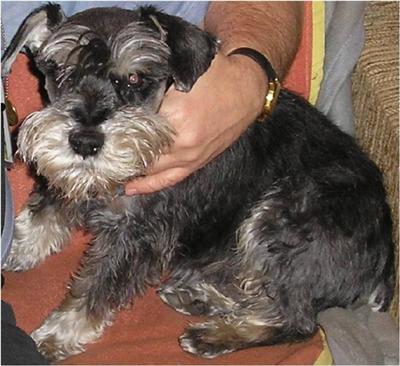 We brought home Toto from his mother when he was six weeks old. He felt himself right away at home he didn't even cry after his mother. He was always very brave, he never was afraid of anything nor any sound or dog, nothing. He survived so many things, babesiosis, dog attack, hit by a car, without complaint.

Toto enjoyed to be chased by us and loved long excursions. He gave grunt sounds when he was petted. When he saw and heard an ambulance car, he mimicked the siren sound. He was a house pet but when we were given a house with a garden for a week he became a watchdog right away and he wanted to protect even the telephone box near our fence.

Unfortunately two weeks ago he had an urinary obstruction, and the first vet convinced me that I was wrong, and he surely peed, only I didn't noticed. Next day I brought him to another vet, by then he couldn't walk. The vet solved the obstruction but he had not recovered, because of too much toxin in blood by then. He became comatose and I was told there wasn't hope for him to recover, so I brought him home from the hospital to die. I called a doctor for the next morning to put him sleep, but in the evening Toto drank water, milk, and ate much, and tried to get up. I helped him walk but we didn't succeed. After it he again sunk into comatose sleep. I intended to feed him in the morning but he again was sleeping very deeply he didn't wake up when I caressed him. I hoped that the vet would judge that his eating in the evening was a good sign and there is hope but he said the best thing is to put him to sleep, and it happened.

Since then I am in a desperate state I regret it so much, I think I would have had to give him one or two days for a chance. I miss him terribly he was a wonderful dear dog, my first and last one too. He would have been 16 years old in July, 21. My heart is broken.