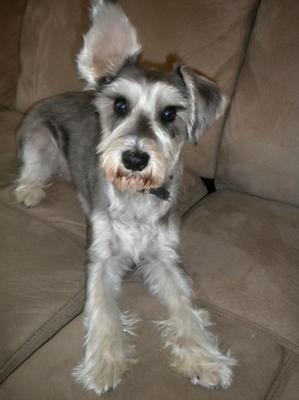 When my family wanted a dog, my husband and I agreed to a small breed. A co-worker of mine said that her cousin had 8 week old mini schnauzers. My daughter and I instantly fell in love with one: Bandit. He was already named that because he looks like he has a "bandit mask" on.

It is now 3 years later and we love Bandit. He is a typical schnauzer. Loves cuddling with family, playing tug of war, and chase bugs. He is a great watch dog. Always on alert but yet so friendly. When he goes for a walk he lets everyone know that he is outside and to stay back. We sometimes call him the one eared Bandit because his ears were not cropped as a pup and somehow one ear stands straight up and the other stays flopped over. That makes him even more adorable.