Schnauzer on the Shelf 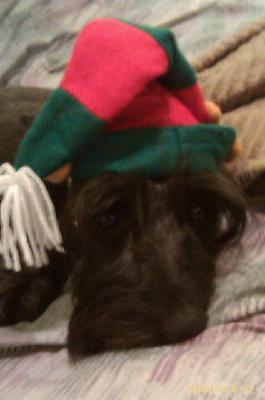 Gunnar is a Black Mini Schnauzer, 3yrs of age. Gunnar loves playing in the snow, squeaky toys, and eating gummi candies... Gunnar is also known as Gunnar Wilhelm Chewpapas (chew papers) because when he would escape his crate he would always shred the bills, newspapers or anything he could get his mouth on. Gunnar also loves napping and snuggling when not wound tightly running and playing.

Although we don't have any children Gunnar has attached himself to my nephew at times when he comes and visits. My nephew has Aspberger's disease which is a form of autism and Gunnar will lay across his lap when he is having a difficult time and needing calming down, petting Gunnar. Gunnar has a very calm nature around my nephew which is very rare since he usually likes to chase children instead of being pet by them.

I was putting out trash one time and was stunned, shocked and screamed about a rat in my trash can, my boyfriend knocked it over so it could get out, to our surprise the ratting instinct took over in Gunnar. He ran after it, bit it in the hip area, paryalizing it on impact then with a last chomp, killing it. Gunnar my Ratter!!