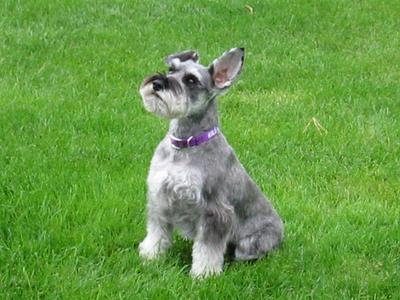 We lost this most handsome and faithful friend nearly a year ago, our Riley Bear. Riley Bear was our first Mini Schnauzer and he set the bar very high. How blessed we were to get this pick of the litter when the breeder changed their mind and decided not to keep him for their own. He was my constant companion for 13 years going to work with me daily and was the best road trip pal on dozens of treks between Seattle and Billings, MT. He was Mr Alpha around other dogs and true to his breed, always had the last word. He loved to hug us around the neck and enjoyed napping on his back, all four feet up in the air.

Riley had wonderful confirmation ...until his ears stood straight up. First one, then the other. I learned later about gluing but the ears became his trademark.

He had a beautiful gait. He looked like he was floating when he pranced and was so fast. I realize now as I watch our current pup run after a squirrel that Riley was so much faster. He had a great hard coat that remained even after years of clipping and well, he was just the best dog. We miss him a great deal.

One morning after he passed, I found the check that I'd purchased him with in the bottom of his toy box. It made me chuckle because it had tooth marks in it but was still intact. He used to carry it around and play with it but never tore it up.

My wish for everyone is that they can have one "Riley Bear" in their life.