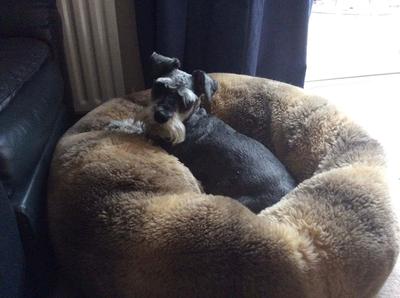 Never having a dog before Bailey was our first and only dog. We had only recently got married when we chose Bailey and still remember the day we brought him home. Bailey was such an amazing dog and was a massive part of the family. Bailey got diagnosed with a liver shunt when he was around 6 years old but that didn't bother him, he took his medicine and ate his specialised food with no issue what so ever. January just gone Bailey snap his cruitaite ligament which he had surgery that was never really successful but he still did ok. We took Bailey to the vet on Wednesday when they were not happy with his ear so we ask them to check everything out., he went in Thursday and they put him To sleep to check things, his other leg had gone bad, he's ears were heavily infected and he had a grade 5 heart murmur. Bailey couldn't take certain medication because of his shunt so he was in so much pain we made the hardest decision ever and sent him to heaven. He was 11 1/2 years old. A massive hole has been left in our family and i have never felt loss like it. Bailey did everything with us and not having him about is unbearable at the moment. I hope it gets easier.