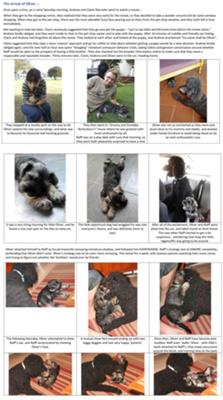 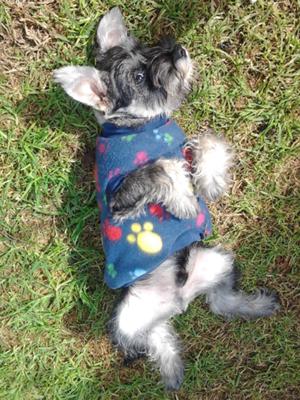 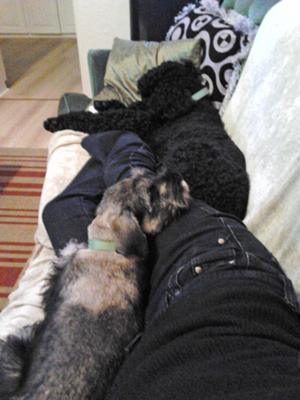 Cuddles on the couch with Ralff and 'mommy'

The arrival of Oliver …
Once upon a time, on a rainy Saturday morning, Andrew and Claire went to watch a movie…
When they got to the shopping centre, they realized that they were very early for the movie, so they decided to take a wander around and do some window shopping. When they got to the pet shop, there was the most adorable fuzzy face peering out at them from the pet shop window, and they both fell in love immediately.

Not wanting to look too keen, Claire cautiously suggested that they go and pet the puppy – “just to say hello and kill some time before the movie starts.” Andrew kindly obliged, and they went inside to chat to the pet shop owner and to play with the puppy. After 10 minutes of cuddles and friendly ear-licking, Claire and Andrew had forgotten all about the movie. They looked at each other and looked at the puppy, and Andrew proclaimed “his name shall be Oliver”.

Claire suggested that they take a more ‘mature’ approach and go for coffee to chat about whether getting a puppy would be a wise decision. Andrew kindly obliged again, and the next half an hour was spent “Googling” miniature schnauzer behavior traits, eating habits and general conversation around whether Ralff would be open to the prospect of having a little brother. They also checked out the breeder information online to make sure that they were a responsible and reputable breeder. Thirty minutes later, Claire, Andrew and Oliver were in the car, heading home.

They stopped at a nearby park on the way to let Oliver explore his new surroundings, and what was to become his favourite leaf-hunting grounds.
Oliver was not as enchanted as they were and stuck close to his mommy and daddy, and ducked under handy furniture to avoid being stood on by an over-enthusiastic Lucy.

It was a very tiring morning for little Oliver, and he found a nice cool spot on the tiles to sleep on. The little spatchcock dog had wriggled his way into everyone’s hearts, and was definitely there to stay!

After all of the excitement, Oliver and Ralff were piled into the car, and taken home to Hunt Street. This was when Ralff started to get a bit suspicious… wondering how long this little ragamuffin was going to be around.

Oliver attached himself to Ralff as his permanently-annoying-miniature-shadow, and followed him EVERYWHERE. Ralff’s strategy was to IGNORE completely, pretending that Oliver didn’t exist. Oliver’s strategy was to be even more annoying. This lasted for a week, with anxious parents watching their every move, and trying to figure out whether the ‘brothers’ would ever be friends.

Since then, Oliver and Ralff have become best buddies. Ralff even ‘walks’ Oliver - with Ollie’s leash attached to Ralff’s, they enjoy excursions around the block, and training time at the park.