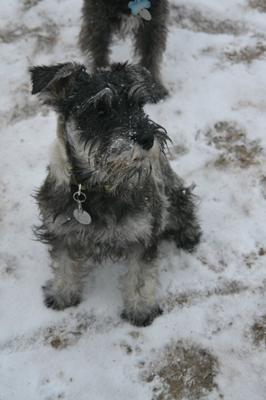 Miniature Schnauzer Jasper:
This was Jasper, my little tough guy. He was my third mini schnauzer and only nine months old when we lost him. What a character though. The toughest little big dog yet such a hugger, best dog hugs you could imagine. He would chase balls, toys and make the sharpest bark at the dog park running after other play mates.

Jasper loved his toys, especially the squeaky toys, talk about a squeaker. His favorite playmate was a German Shepard Puppy, someone he could roughhouse with. Never gave up, he was a solid muscle wall and big boy.

This photo of Jasper is taken in the backyard of my house in Colorado, after playing in the snow fall. It truly captures his personality. Always looking for an adventure, but kind at the same time. I miss his hugs and kisses the most. He was a true Schnauzer though, always moving, always loving and always my little Tough Guy!