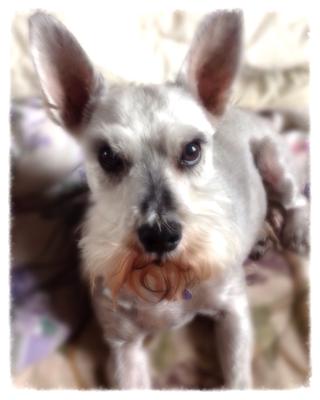 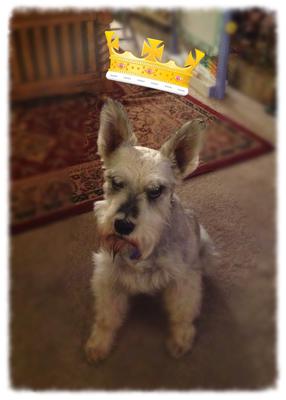 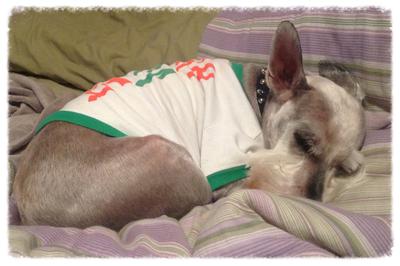 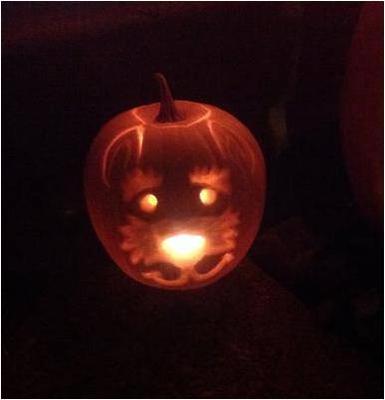 I did a pumpkin this year in memory of my sweet baby, Piper! Rest in peace my sweet bundle of fur!

Piper was born 10/31/2002 to my female miniature schnauzer Precious, and my male mini, Patch. When he was born I tore him out of his birth sac and I cut his umbilical cord. I was the first to hold and kiss him. From that moment I knew he was mine and he stole my heart.

As soon as he was born he was crying and squeaking so we named him Piper. Out of the litter of 6, he was the only one who constantly cried for me and as soon as I picked him up, he would be fine. At first I thought my husband was going to make me sell him, but, he surprised me for Christmas and put a bow on him and gave him to me as a present. It was the best Christmas gift I have ever received! And every day since he was born, he has been by my side. No matter where I went, he would follow me. Although I had 2 other schnauzers, and I knew they loved me, they didn't love me or need me as much as my Piper. He was truly my furry baby. I could be stressed to the max, but all I had to do was bury my face in his fur and my troubles would go away and my blood pressure would lower.

We had many routines and sitting on my lap in the morning while I drank my coffee was one of them. Another was whenever I got a book out to read, he knew and would jump up next to me as soon as I sat down. Now my heart breaks every morning and I haven't been able to read a book since he passed on 10/15/2013.

His illness hit pretty quickly. Over a 2 week period he had lost about 7 lbs and he was laying around all the time, would hardly eat and was thirsty all the time. We discovered he had diabetes. We came home from work and let the dogs out like we always do. It was a pretty day so my husband thought he would leave them out a couple hours to play. (They had been cooped up in our bedroom all day). When he let them in, Piper didn't come. We called him and looked with no luck. Then my husband looked in our small decorative pond and there he was floating. It was heart wrenching. We were devastated. The pond wasn't over his head. Him and the other dogs had fell in it before, but there was never a worry of drowning due to it not being deep enough. I know he was always trying to drink the water, but I don't know if he hit his head, was too weak to stay standing, got hypothermia, had a heart attack, or simply gave up due to being so weak. Whatever happened, it kills me inside to think of how afraid he must have been, and that he needed his Mommy and I wasn't there for him. Then I look back and I wonder why my husband and I didn't try mouth to mouth or something. When we pulled him out he was pretty cold and was kind of stiff, but we should have at least tried. I will always hold that guilt in my heart of not being there for him and for not trying to do something else to save him.

I miss him so much and I have never felt this deep of a loss. God forgive me, but I think I loved him more than a majority of humans. I pray he is happy in heaven.