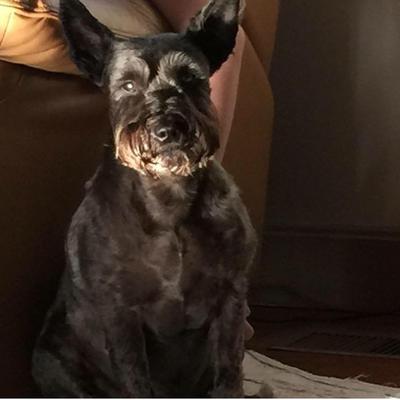 I could talk forever about my boy, Barney. He was 1 month shy of turning 12 years old when he passed away. I truly believe this dog was an angel. He wasn’t just a dog. He was my son, my 16 year old daughters brother, as she has no siblings. She’s had him since she was age 4. He was also her best friend. He was so precious. The most beautiful dog I’ve ever seen with a soul to match it. His personality was so sweet and kind. He wouldn’t hurt a flea. He could say I love you. He loved taking rides to watch for cows and bucks, playing with our other two younger mini schnauzers, and getting belly rubs. If you were hurt or sick he wouldn’t leave your side. We took him everywhere with us on vacations. I know I’ll never have another dog even close to what he was. Every kid from school who has been to our home over the 12 years instantly gravitated towards him and they all fell in love immediately. Needless to say when they found out he passed away a lot of tears were shed. I’d give anything to have him back. He was always very healthy but recently he was Dx with Diabetes. We’ve been fighting it for about 4 months. On a Sunday afternoon he was fine and watching the approaching storms out the window with my daughter and the next morning he seemed weak. He would hide and not come out for anything. He began to shake, wouldn’t eat, we checked his sugar, it was a little high but not too bad. The following day he was vomiting everywhere. We rushed him to the vet and she told us he was very ill, he was extremely dehydrated, and she said his quality of life was not good. His body was giving out and she thought if we agreed it was his time. He passed away at 4:49pm on May 8th after suffering two seizures after the sedation injection. My heart was and still is shattered. We’re lost without him but we know he’s now pain free and in a better place. If this touches your heart know that he was that special. Sometimes I think God sent me this angel portrayed as a dog because I’ve not once in my life ever met a dog like him and I’ve had dogs my entire life. He had the most beautiful long eyelashes and his little eyes were so innocent and loving. I’ll never go one day without thinking of him or missing him. He was a Godsend. I love you so much Barney aka Grampy. I’ll see you again one day and I’ll never let you go again. RIP Barney Joe Bell❤️🐶🌈😇 6/9/06-5/8/18 Greenfield, Ohio