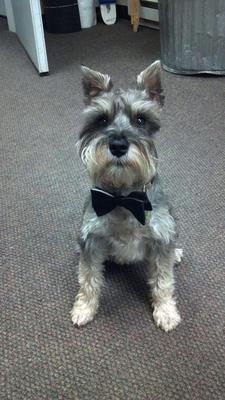 In November of 2010, I first brought my miniature schnauzer Oliver home. He will be 2 years old on August 31st and still has his charming puppy looks. He loves all toys, but especially loves playing soccer with his best friend, an American Bulldog named Kobi.

Do not let Oliver's size confuse you, he is definitely the boss in that friendship! His favorite snack is sliced apples and once in a while I let him share a spoon of peanut butter with me.

This past weekend he went swimming for the first time. We went boating with our friends and he was the first to jump in! He was definitely a little shocked, but he handled it well. He loves all people and especially loves going to the park so he can say "Hello" to everyone there. He doesn't mind chasing the geese as well.

Since I have had Oliver he has been the love of my life and I can't imagine life without him and his spunky demeanor. Although in all pictures he looks very serious, in person he is extremely playful and goofy.