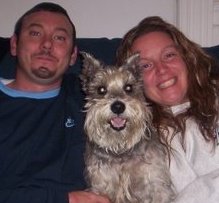 On May 14th 1996 my life as I knew it changed forever. Prior to that day, I was working for a Public Relations Firm Full Time, and was going make a career out of it, even though I didn't feel completely fulfilled. I just shrugged it off as-"who likes work anyway".

On that day a true blessing came into my life named Sam. He was a 5 month old Miniature Schnauzer who had been returned to his breeder because the first home he went to had children, and let's just say it didn't work out (I think the kids tortured him-not in the literal sense, but just weren't gentle with him).

48 hours prior to me getting Sam was Mother's Day. We were having Mother's Day dinner with my Mom and my Grandmother (who lived with us-I still lived at home with my parents at this time) and started to talk about the Mini Schnauzer my Grandmother had when I was a child. She said how much she missed him and missed having a dog but couldn't take care of a dog on her own now. So out of no where I said-"Well if I was able to get a dog, I'd get a Mini Schnauzer, and take care of him, and when we are at work, he can keep you company during the day." Never thinking my parents and my Grandmother would OK this as I'd been asking for years to get a dog. But to my amazement they said yes! So then miraculously the next afternoon I found a Mini Schnauzer Breeder, called him, and he told me that just that morning a couple had returned a 5 month old Mini Schnauzer to him and that was all he had. When he said that, I KNEW that was MY DOG. The next morning I got in my car, drove an hour to the Breeders, and took Sam home.

We were instantly bonded too. And in the coming months, in brushing him and learning about dogs, I realized that I really enjoyed brushing him and taking care of him. So one day I just decided to make a career change. I enrolled in Grooming School, found a job working in a Pet Shop (that didn't sell pets)/Dog Grooming Salon and quit my PR job. I got my Grooming License, and then became a Veterinarian Technician at an Animal Hospital I was also grooming at. I now know what it's like to have a job you truly LOVE. I didn't know that before.

Had Sam not come into my life, I don't know that I would have ever figured out that I was destined to work helping animals. I brought Sam to work with me every day too once I stared working with animals.

Sam was there for me when I broke up with my long term boyfriend-the same boyfriend who had been with me when I got Sam and called himself Sam's Dad, but when we broke up, had nothing to do with Sam ever again. Sam was there for me when my Mom took her heart attack, when I met the man who would become Sam's TRUE Dad and my husband (and had to pass Sam's approval-and did!),when my Dad died and then finally when my husband and I got married. Just 7 months after my husband and I got married, Sam passed away at the age of 14. We truly feel he stayed long enough to see me get married and KNOW I would be OK and not alone, as he as, as I said-my co-pilot.

One of the last things I said to Sam before he passed was that I would always work helping animals, and do it in his name. It's a promise I intend to keep.

I miss Sam so much. So many of us do. He touched a lot of lives when he was here on Earth. I got hundreds of emails and cards and even flowers when Sam passed. That's just how many lives he did touch. I knew he was a special dog, but I never realized just how special until he was gone.

So many people have told me that they went out and adopted their dog from a shelter because of Sam. That they saw how great having a dog could be and wanted that relationship themselves and went out and adopted their dog because of that. And every pet I help save, I do so because Sam made me realize my calling was to help animals. For years to come, his legacy will be felt in many ways, and in many places. You can't ask more than that.

I now have a Boston Terrier named Sophie. I will have a Mini Schnauzer again someday, but just could not have my next dog after Sam be a Mini Schnauzer. That would have been too much for me and my husband personally.

Thanks for letting me share the story of my Sam. Sam is just one of many many truly wonderful Mini Schnauzer's in the World. They are a truly wonderful Breed as a whole and I can't say enough good things about them.