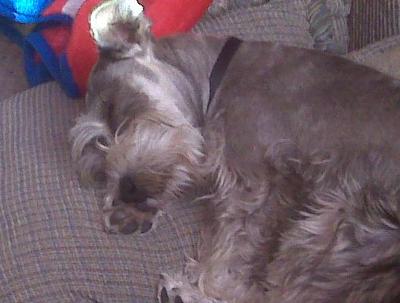 Miniature Schnauzer, Taking his nap on his paw.

Dolce was rescued from a woman who had been breeding miniature schnauzers with her now ex-husband. When the divorce was being worked out, there was a day when she became extremely angered at her husband and began to throw all his belongings down a septic tank. When she ran out of things to throw, she turned to the dogs and began to throw the puppies down the tank as well. Her son called his father and he ran over there and managed to save the two dog parents as well as three puppies, one being our Dolce. Unfortunately this woman managed to kill two of the puppies before the police showed up. She has since left her children here and ran off to Florida. We feel so grateful to have been able to give this puppy a good home and a very well deserved life full of love.