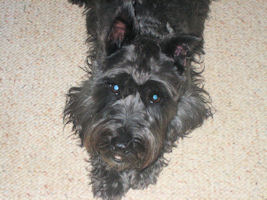 Gimli was a black mini. He was born September 5, 2005. He commanded attention. He was love personified. Gimli died Christmas Eve 2007 when his collar got hung in his brother's tooth while they were playing. I only turned my back for a minute to dry my hair, we were going to Petsmart to pick out Christmas toys. I knew these guys played rough and tumble so I invested in special break away collars. They didn't work. When I got to him just a few minutes later he was gone. I had the vet on the phone and gave him CPR. She gave him a shot in his heart but he was gone.

I feel robbed and I even now I can't reconcile it in my brain. I miss him so much and I pray that he forgives me for not watching them for a few minutes.

He loved to be held and touched. He loved to watch TV, Meerkat Manor was his favorite. He slept between us because with all his bravado, he was just a little boy. He was handsome and sweet.

My life is so much less without him in it, but so much more because he was. I will miss him forever.

His headstone in the garden reads, "Forever Our Angel, Beloved Baby Boy".

Godspeed my love until I see you again..