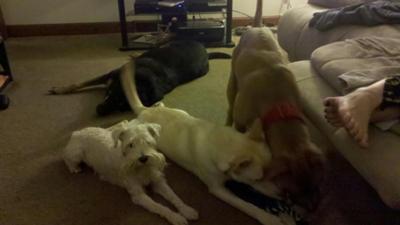 Fry is the white guy on the left obviously. The cream colored dog right next to him is Rory.

The first time I saw him he and his litter mate were fuzzy white balls. I had no idea he was a schnauzer. I picked him and his sister up and she was quite a handful. He on the other hand was as calm as could be. I inquired and was told that they were schnauzers. I learned later they were confiscated from a backyard breeder who was had sold their litter mates at 5 weeks old. The shop they were in was run by a woman who worked at the vet they were taken to for bottle feeding. she was selling them for 300.00.

The next time I visited them I wanted to show them to my daughter. After going out for dinner we headed down there. His sister was sold, but he was still there. My husband walked out with him after secretly buying him. He was "marked down" to 150.00. I had 3 other schnauzers at the time and wondered aloud what I would do with another. My daughter immediately offered to take him. I couldn't tell her no and she brought him to her house and they groomed him. He looked like an angel.

Over the years we got to know and love him. Smartest dog I have ever met. He was an escape artist. We called him Frydini. He could get out of my yard no matter what I did. Once even balancing on the edge of a fish tank and then jumping onto a railing, walking down the stair railing and jumping down. He could climb baby gates. He had a special bond with my daughter. You could tell how much he loved her.

Fry died in September when he and his doggie friend Rory got out of my yard and got hit by a train. They were both killed. The pain is unbearable. It has not ebbed. My tears lurk just under the veneer of my life. One thought brings them to the surface. I think about them every day. I miss them every day. I hate that I have to live in a world without them.