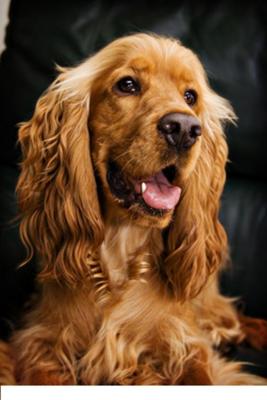 It was the first day of January 2001. I was ten years old then. For years I was pestering my parents for a dog. That new year eve, I decided to spend with my grandfather. My uncle drove me down to my home in the afternoon. My dad and mom welcomed me home and after wishing each other happy new year, my mom disappeared into my room and returned with a fruit basket and presented it to me.

There in the fruit basket, lying fast asleep on a silk cloth of maroon colour, was a tiny cocker spaniel pup. I squealed in delight and hugged the pup and held him against my chest. I immediately named him Boss. Boss was licking my face and from then on, we are inseparable. As he grew up, he treated me like as though I was of his age. Somewhere down the line, his name changed from Boss to Bosco.

Bosco is an extremely intelligent dog. He barks very rarely and always thinks before he reacts to any thing. My father had to leave us a couple of years ago, as he was given an assignment in another city 400 miles away from where we lived, primarily as he did not want to disrupt my education. My father used to call us up every evening. It was in the absence of my father, we all realized, that my dog was actually the closest to my father. My fathers absence made him sad and Bosco used to sulk around.

Once, when my father called up, Bosco was really feeling miserable. Just to console him, my mother held the telephone near his ears. After hearing my fathers voice from the instrument, Bosco listened intently and was soon wagging his stubby tail. That evening Bosco was a really changed dog and was in high spirits. When ever Bosco was gloomy, my mom or I would ring up my pa and my pa would speak to Bosco. This continued for a few days. Then one day something strange happened.

That evening as my ma was preparing dinner, my dog was barking continuously in my ma's room. Not normally prone to Barking, my ma went to her room to see why Bosco was barking. Any then I heard a huge laugh from my ma. My ma was laughing non stop. I saw that Bosco was sitting near my Pa's study table and was looking intently at the telephone instrument and then it struck me that Bosco wanted to hear my fathers voice!!! This continued for the next two years. Around dinner time, Bosco would go to my ma's room and start barking at the telephone. We would ring up my father and my dog would hear my pa's voice before me or my ma could speak to my father.

In those two years, when ever my pa came to meet us, Bosco was his shadow. Its more than two years since my pa has returned, but now, Bosco never leaves my father whenever he is at home.