A Tribute to Miniature Schnauzer Dexter 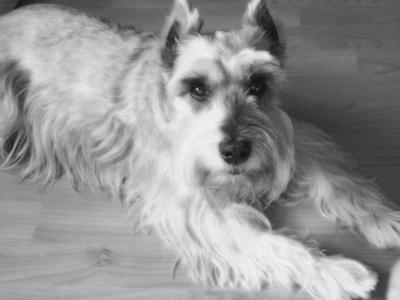 Dexter, the love of my life

I rescued Dexter from the ASPCA when he was 2 years old - a little spitfire of a Mini Schnauzer that I feel chose me to be his mom because when they put us in the room to get to know one another he ran right up and kissed me on the face - I said that's my dog, I want him!

He was always energetic, playful, protective, and all around wonderful. He was a beautiful dog as well, people would stop me all the time and comment on how gorgeous he was. He made so many people fall in love with the breed any many friends ended up with Mini's after spending time with Dexter, he represented his breed so well.

Aside from a few bouts of pancreatitis and a heart murmur, he had always been a healthy, hearty dog. About 8 months ago I noticed that one of the little fat pads on his lower back seemed bigger than the other. I mentioned it to his vet who said it wasn't unusual for smaller dogs to get pockets of fat there and for them to sometimes be asymmetrical. I accepted that answer and we continued on, but it still continued to grow and finally it became more like a ball, a definite round bump. It was aspirated, examined under the microscope and it was made up of fat cells, reason they felt it was hard was because it was under muscle. It continued to grow and I requested it be removed because it was quite large for a dog his size.

During the surgery the doctor became alarmed because it seemed unusually dense and had grown through the muscle, so to be safe it was sent out for biopsy. The day after Thanksgiving 2010, I got the news that the mass had been a sarcoma. Cancer. The one thing you never want to hear, one of my worst fears realized and I was devastated. I was told the prognosis was 3-6 months, which to me felt like only hours, days, not nearly enough time. I cried a lot then decided we would beat it, Dexter was going to blow those odds out of the water.

Unfortunately, that didn't happen. I spent the past 3 months changing diets, giving him herbs, supplements, acupuncture, energy healing, any holistic remedy I could find to help him but nothing worked. The mass came back as I was told it would and it came back with a vengeance. It grew to the size of my hand and began affecting his spine and right rear leg about 3 weeks ago. Yesterday morning I woke up to him moaning and crying in pain, despite being on pain medication and unable to even stand, much less walk. As painful as the thought of letting him go was it was far worse for him to be in that kind of pain and suffering, so I made the choice to give him peace. His doctor came to the home last night and I held him as he peacefully released from his pain and suffering. I held him and told him the whole time how much I loved him and how sorry I was I couldn't fix things, but I loved him more than anything else in the world.

The void in my life and heart is huge, I cannot believe he's gone. My grief is immense and I don't know how long it's going to take for me to work through this pain, it's overwhelming and devastating.

I miss you so much Dexter, I love you with my whole heart and soul and I'm so grateful you chose me to spend your life with and I know you haven't really left me, I know you will be with me always and I will see you again one day. Love you my baby.